NEC ECC: What happens when submitting an impact programme the delay is shown but also show critical activities planned to commence earlier?

As contractor under NEC3 Option A, we have submitted an impact programme with our CE quote. This programme shows the planned completion actually earlier than the previous accepted programme PC date. The reason is that on this impact programme critical path activities are shown to commence earlier than what was shown on the Accepted Programme. These critical activities are not part of any of the critical activities that has been impacted that is associated with this CE.
Because we have shown the new sequence i…e. bringing critical activities forward the planned completion date is also brought forward and paints the picture that there is no delay. Our argument is that the CE should be assessed independently for what the impact is and that the improvement on starting critical activities ahead of schedule and in this instance creating terminal float is to be assessed separately…?
This understandably does not go down well i.e. we are claiming for delay but showing that we have created terminal float and planned completion earlier than previously reported.
The PM’s point is that we can’t claim the delay as we have shown PC has not been impacted.
This surely is pure NEC where the delay should be assessed for what it is and any improvement beyond the completion of the delay is ultimately beneficial to all seeing that we will hand the building over sooner but also for the Contractor in creating terminal float?

What you need to be able to do is demonstrate that at the time the CE was instructed (or notified if not off the back of an instruction) show where planned Completion was taking into account progress and any other compensation events that had happened prior to that date. NEC4 now clarifies this in the new 2019 version wording, but is clarifying what the rules always were but now in a more transparent way. If this CE had not come along, you could have been off the job earlier saving money but now this CE means you will have to stay on site longer.

In the same way if you were already running late before this CE came along, and this CE has no further impact then you are not entitled to move Completion Date, where as if you base it on the last Accepted programme it may show entitlement. this same rule would then clearly be in the Employers interest.

So I think what you have said is contractually correct. You need to demonstrate where you were at the point the CE came along i.e. ahead or behind programme, and then assess the extra over impact on the CE at that point. The difficulty you will have is PROVING that you were ahead as you suggest and you are not making that up just to justify entitlement.

I attach reference to an article here which whilst based on NEC4 is should be the same principle for NEC3: 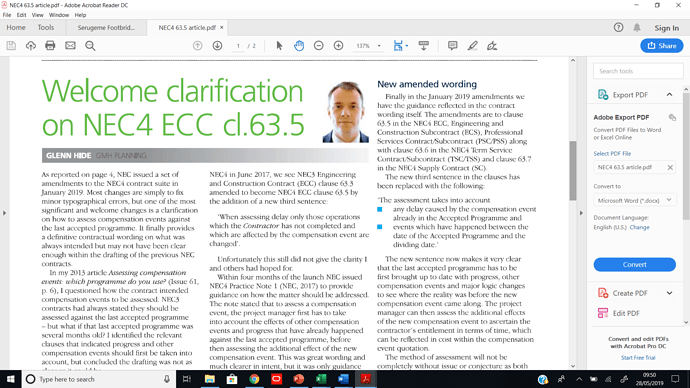 2019 NEC4 amendment to clause 63.5, Without trying to sound to corny this article is a bit of closure for me in my quest for clarification to the industry of how to assess change against the